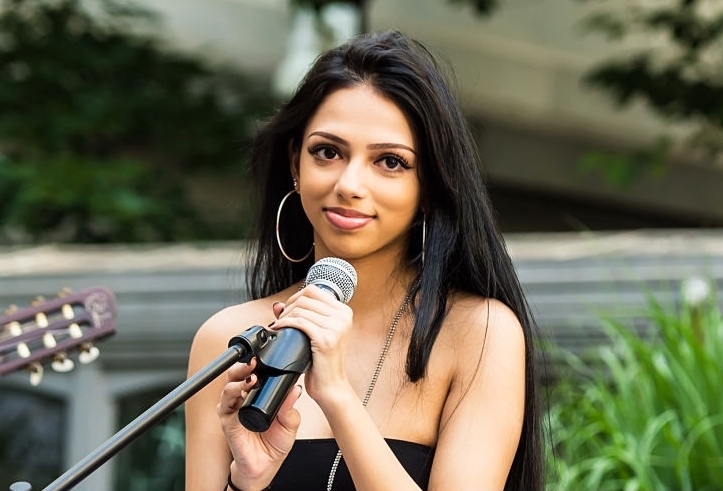 Much of today’s popular music owes the R&B genre a bit of gratitude. So many of our frequently played favorites, whether discovered on the radio or in the midst of a shuffled Spotify playlist, feature smooth cadences, tender lyrics, and diverse collections of rich instrumentals. One such artist whose visceral songs draw aesthetic influence from the style of R&B is singer-songwriter and daughter of filmmaker M. Night Shyamalan, Saleka. At just 25 years old, Saleka is making her way in the indie music scene, producing songs that bring solace, inspiration, and raw beauty to the genre. Her most recent single, for instance, entitled “How Many,” was born out of the Black Lives Matter movement in response to the murder of George Floyd. This piece reflects Saleka’s relationship with music as a therapeutic outlet that also serves as a vehicle for encouraging social change. It is both a call to action and a product of the artist’s own introspection in regard to race and the power of one’s voice. On October 13th, Saleka comes to Philadelphia to perform her first show as part of her new residency at the World Café Live venue. In anticipation of this event, I was grateful enough to get to speak with Saleka. Our conversation gave me some insight into her journey to becoming an artist, the intention and effort that goes into her music, and her future plans and ambitions.

Could you talk about how you got started making music? When did you decide that you wanted to do this professionally?
“I studied classical piano for most of my life until I was, like, seventeen, and that was kind of the path that I was on . . . everything was leaning towards me becoming a classical pianist and, you know, going to a conservatory and making that my life. And when I was about, like sixteen I kind of changed paths and I decided that I wanted to write my own music and sing as well. . . . it was kind of a little bit of a leap of faith, but it ended up working really well because I was able to incorporate all of my classical piano training into the songwriting and performing and all the things that I still do now. I went to Rider University and I studied music there as well, and literary arts, which kind of all came into the writing aspect of music. And then after I graduated I started working on this first album that is coming out soon.”

What draws you to the R&B genre?
“Partially it’s what I grew up listening to. My parents would always play R&B music and hip hop music and jazz music. And so I was surrounded by those genres . . . there’s just something about it that, for me, just feels right. It feels soulful . . . I just think there’s a lot of depth to it, and . . . I feel like, when you really connect with a genre, there’s certain songs that kind of become, you know, defining moments for your life at different points, and for me those were always R&B songs. . . . I have been able to experiment with a lot of different things through R&B music. . . . sometimes I have a hard time saying ‘Oh, I’m an R&B artist,’ or even categorizing other artists that we know as R&B artists as that because I feel like it’s so fluid now, and I love the way that things are changing.”

Where does your music come from; what inspired your singles, and what motivates you to continue to write? Is there one song of yours that reflects who you are more than the others?
“Mainly, you know, personal experience and the things that I’m going through. Music is kind of my way of processing life, I would say. So, whenever I’m trying to understand something or trying to process an emotion, . . . I kind of do that through music. You know, making a song is just a moment in time . . . even a year later or, like, six months later I feel like a different person and the songs that I’m writing are different. It’s hard to say; a song that would define who I am now . . . but if I had to say one, I would say ‘Graffiti’ just because it’s the most raw. . . . even the process of making that was the most raw . . . and it was a really personal subject.”

Can you tell me about your most recent single, “How Many?” What was the process of writing the lyrics and developing the music like? What do you hope others will take away from it?
“That song was particularly hard for me to write just because I was trying to find my place in that particular issue and understand my privilege . . . I wanted to express these things but also to know my place within them and not to overstep. So it was kind of a tricky song to write and it was also just very emotional, and there were times when I just stopped writing it and then came back to it, and I think after everything that happened with George Floyd I was like, ‘I need to finish this song’ . . . And then musically, I worked with two of my friends from Brown who produced the whole first album with me . . . and they really helped kind of flesh out the rest of the song. The drums are really essential to that song . . . we wanted it to feel like this kind of rising movement. It’s kind of like a protest song but it’s not really, and I think the drums have that feeling to it, even if the lyrics don’t. And at the end there’s this djembe solo over the outro which is my favorite part of the song.”

How did you get involved with the World Cafe Live in Philadelphia?
“I played there a couple of times . . . it’s always been a venue that I really love. Now I feel like I’m growing up performing there . . . And the last few times I did that, I was opening there, so it’s really cool to be doing a residency. That feels like a huge development. I really love the room and the space, and so many of my family and friends are in Philly, so whenever I perform there it’s always packed with family and friends, and that’s such a fun environment.”

What is in store for you in 2022?
“I’m doing this residency, which is this year, October, November, December. It’s gonna be World Café, and I’m also performing in New York and D.C. . . . next year there’ll definitely be more shows to come, but I’m planning on releasing the full-length album at the beginning of the year. And then I’m also writing some more songs for a TV show called Servant on AppleTV Plus, which I wrote one song for that came out this year . . . so that’s gonna be its own little project.”

Thanks again to Saleka for taking the time to speak with me; it was an absolute pleasure. Saleka will be performing at World Café Live in Philadelphia on October 13th at 8pm EST. Her songs are available to stream on Spotify or Apple Music, and in addition to its cameo on Servant, Saleka’s music can be heard on the soundtrack to the 2021 film, Old, directed by her father.