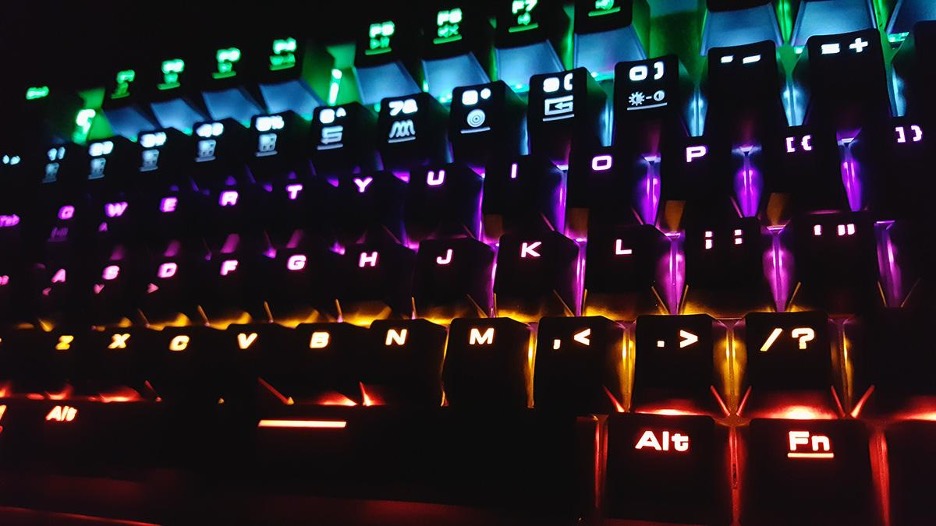 Every time I walk past the rainbow-hued windows of HCA, I wonder why we are so obsessed with RGB lighting. If everybody has access to them, how have they avoided being labeled as cringe? So, please join me in this rabbit hole, I’ve spent way too much time down here. The first wave of the RGB invasion was limited to the gamer community. From keyboards to speakers, the flashiness and customizability of RGB accessories became a key part of everyone’s setups, like magpies putting shiny things in their nest. Even though many of the components and tools used by gamers are the same, using light is a quick and easy way to create unique setups, customized to a given person’s preferred aesthetic. However, for a while, a brightly lit office was only cool to gamers, with lots of side-eye and mocking memes being cast onto the generalized group of “boys with light-up keyboards” (yikes).

So how did we break the RGB stigma? To my understanding, the rise in popularity of Twitch streams with more mainstream games like Fortnite made gaming culture more accessible. Suddenly, to participate, you didn’t need an expensive PC or the newest gear. This change spawned a new group of people who embraced only the aesthetics and lore of gaming, watching excitedly as professional gamers manned the controls. Thus, RGB was normalized enough to hit the layperson’s market.

I first became aware of RGB as something ~cool~ on TikTok. Partially due to the pandemic, TikTok has become a more toned down DIY platform, often featuring creators making videos out of their bedrooms. TikTok also allows for hyper replicability as people recreate simple dances or buy out Target’s entire stock of the new hit product. RGB appeals to both of these groups since, for the more bold alt communities, they have the inherent individuality that initially captured gamers, yet they are still simple enough for people who just want to blend in. It seems like an oxymoron that something could be both original and mainstream at the same time. In a time when we’re all grappling with forming a community out of isolation this confusion seems totally fitting. The pandemic has forced us to reckon with our own identities, but it has also introduced a new sense of loneliness. A product that unites young people while allowing customization and individuality is exactly what we need.

TikTok specifically popularized the use of RGB light strips placed close to the ceiling or strategically behind bed frames and bookshelves. This trend is especially fitting for the otherwise small and dark dorms that most college students inhabit. Especially in a pandemic where we are forced to spend far more time alone in our rooms, RGB lights allow for a simple way to shift perspective, changing the room’s vibe in the blink of an eye, and hiding the Gummere Carpet’s mystery stains. RGB lights have totally saturated the field of college decor because they allow for an added level of self expression, yet they are so accessible. They are fairly cheap, and can be purchased anywhere online. There isn’t one big brand or type of strip driving up the prices or gatekeeping “the cool type of RGBs.” Even though nearly everyone has them, RGBs haven’t yet become played out.

I’ve come to the conclusion that the key here is that even though the technology of them isn’t unique, the places you hang them and the colors you customize to your personal vibe is the distinguishing factor. Because they are so simple they are a launchpad for creativity where you can put as much or as little work into them as you’d like, but still receive a great result that is purely your style. Somehow, by not being anything special, RGB lights have become one of the most important elements of young people’s interior design.